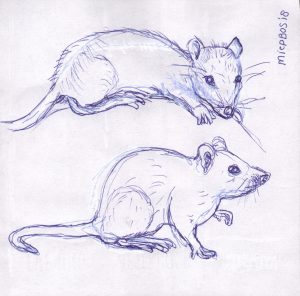 Genetic modification (GM) represents new opportunities for enhanced crop features such as improved insect resistance and herbicide tolerance. The technology allows for cross-species alterations, therefore potentially allowing a vast array of novel traits. Many GM crops have been developed and approved for human and animal consumption. The present study investigated a triple-stacked GM corn variety containing modifications for insect resistance (via cry1Ab and cry3Bb1 genes) and herbicide tolerance (via an EPSPS gene), which was fed to rats for six months. The study investigated the mucosa of the stomach. Alterations to tight junction apposition, gland dilatations with epithelial elongation and dysplasia in the GM-fed rats were observed. These results indicate that GM-corn may have an effect on rat stomach mucosa, which may have health implications.

After randomisation, there was no difference between the body weights of the GM-fed and non-GM-fed groups. Over the next few weeks, it was noticed that the dietary intake of both groups of rats was not as high as expected and that the GM-fed rats were eating less than the non-GM-fed rats. Neither group of rats lost weight. The diet manufacturer suggested that the moisture content of the diets should be increased. The diets were therefore sent for repelleting, starting with the GM diet, because they were the group with the lowest dietary intake. The provision of moister diets resulted in a typical weight gain for the remainder of the study. Because the GM-fed rats were fed those diets a few weeks before non-GM-fed rats, they weighed more at the end of the study compared to non-GM-fed rats. Consequently, no conclusions can be drawn about the effect of the GM diet on body weight. Furthermore, because larger animals could be expected to have larger stomachs, the stomach weight was expressed as a proportion of body weight. The mean stomach weight to body weight ratio (and interquartile range) were 0.46 (0.44 - 0.50) and 0.43 (0.40 - 0.49) for non-GM and GM-fed rats respectively. The difference was not statistically significant.

Of importance, the total dietary intake over the course of the experiment indicates that the study has become more conservative in its findings, that is, any effects of the GM diet on the stomachs of rats has been underestimated. This is clarified in the discussion.